Perpetually exhausted, I could barely stand to look at my own reflection.

In the midst of a failing marriage, I was suffering from postpartum depression and 50 pounds overweight. Before I became pregnant, I weighed just 115 pounds. And I put enormous pressure on myself to be perfect.

I’d go to the gym at 6:30 A.M. every morning, throw in an evening spin class for good measure, eat clean six days a week, and then binge on my “cheat day.” If I ate something unhealthy on my clean-eating days, I’d throw it back up and chug a protein shake instead. I ate low-cal, sugar-free foods and obsessed over what I looked like in the mirror.

But after I became pregnant, I let myself go.

I figured people couldn’t judge me for piling on the pounds anymore, so I stopped watching what I ate. I quit exercising completely, and would binge on greasy junk food instead: french fries and burgers and pasta and ice cream, you name it. I ate all sorts of shit that I wouldn’t have otherwise.

Little did I know how the choices I made then would impact me, my marriage, and my ability to be the best mom I could be in the future.

Two weeks after I gave birth to my daughter, I STILL weighed around 160 pounds. At 5’3”, that was a lot. On top of that, I felt like a terrible mother; I never had any energy, thanks to all the crap I was eating.

One night, as I held my screaming baby in my arms, I broke down. All I could think about was how much I wanted my old life back (and my old body, for that matter).

And so I tried. I tried everything in my power to shift the weight. I clocked countless hours of cardio, I cut out carbs completely, and I tried every fad diet going. I lost some weight . . . but I still didn’t feel good. Instead I felt deprived, and I constantly craved the foods I’d obliterated from my diet. Not to mention the fact that I STILL hated what I saw in the mirror.

To cut a long story short : I felt like a failure.

So I set out on a mission : a mission to research and rethink everything I knew about health and wellness.

When my daughter turned one in 2004, I went back to school to become a nutritionist. Educating myself on health and nutrition was a game changer for me. It gave me my POWER back. I finally felt in control of what I ate and how I felt. And food didn’t control me anymore.

In 2008, I opened two weight-loss clinics. As a single mom with 10 employees, working 12-14 hours a day, I quickly found myself grappling a huge amount of stress. I had ZERO time, but still managed to squeeze in hour-long workouts 5-6 times a week. I adored how physically strong, confident and balanced exercise made me feel, and giving it up wasn’t an option for me.

The real test of this new lifestyle came when I became pregnant with my second daughter in 2011.

but there was nothing else for it . . . I continued to do what I knew how to do : I ate exactly the same, or a little more when I needed to, and I listened to my body.  Despite having awful morning sickness—and no energy for the first 12 weeks—I was determined to keep exercising. I hired a personal trainer (and mom to four kids of her own) to kick my butt into shape twice a week by applying High Intensity Interval Training (HIIT) principles.

Now I could get more done in less time, plus I felt better as a result.

I was focused on being the best version of ME so I could be the best Mom to my two girls.

Instead, I focused on becoming healthy.

As a result, I felt healthy and strong.

Instead of binging on junk food, I felt energized. I was even craving KALE (I shit you not).

I gained just under 30 pounds and gave birth to a healthy baby girl. And, within a few weeks of giving birth, I’d dropped most of that weight.

Since then, I’ve really come into my own. I’m a better person and a better mother. Eating right and moving my body has become easier and easier as the years have gone by. 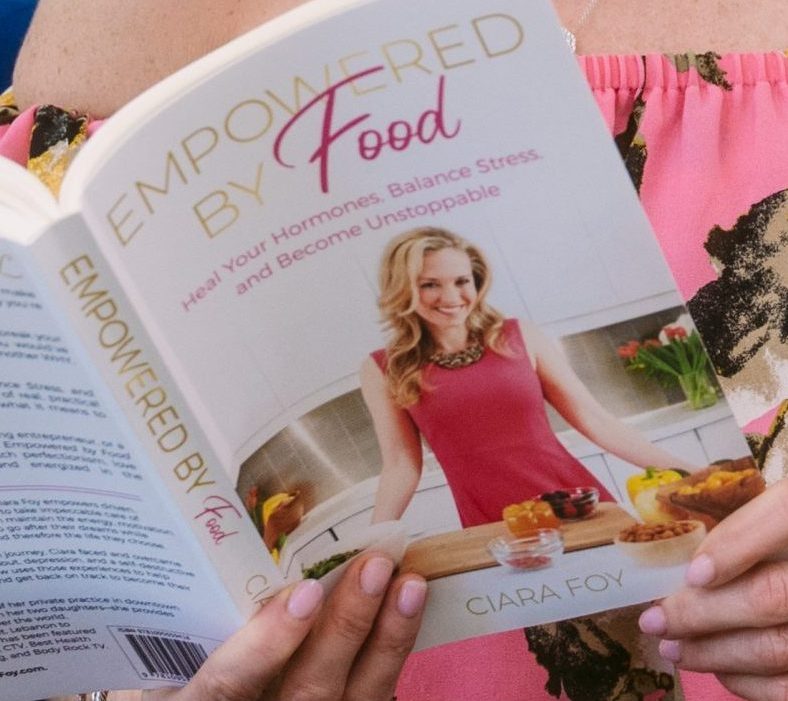 READ MY BOOK FOR FREE

Empowered By Food, is here!

Get Instant Access to Chapter 1 PLUS a bonus invite to my FREE private community “Empowered by Food Collective” where you can download the full digital copy for free!!